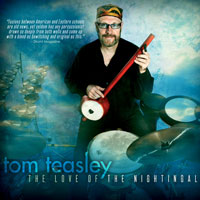 Love of the Nightingale Liner Notes

This music was created for Constellation Theatre's production, "The Love Of The Nightingale", directed by Allison Arkell Stockman. It will also serve as part of the soundscape that I perform live for this production. Elements of this CD will be altered, eliminated and remixed in surround sound, in addition to my live playing, to provide a unique audio experience.

In keeping with the Greek/Balkan fantasy world we have created, I have chosen to use a wide variety of time signatures.This is inspired by my travel as a cultural envoy for the US State Department to the Middle East performing on a variety of world percussion and other instrumemts, my studies with drum master Joe Morello (Dave Brubeck Quartet) and my interest in the mystical power of numerology. Even though there are many exotic time signatures represented, (cycles of 5,7,9,11 and 13) I have maintained the dance sensibility. All possible odd time signatures can be broken down to a two step and a waltz.

I'm playing over fifteen different instruments on this recording, ancient to futuristic. Given the many bird references in the script I have chosen to use a variety of flutes for the melodic lines. The Armenian-American composer Alan Hovhaness is an inspiration for much of the melodic and thematic material. I'm humbly paying tribute to my teachers and influences from a variety of sources. As mentioned, Joe Morello, with his time bending experiments with Dave Brubeck has been a great inspiration. Frame drum master, Glen Velez, has shaped my concept of a multi-styled hybrid musician. The production values of T-Bone Burnett and guitarist Bill Frisell have also weighed heavily on this recording regarding the manipulation of sound. My great friend, colleague, bass player and computer guru, Jim Robeson has contributed more than words can express.

Rhythm is the lifeblood of the universe, I'm honored to share my pulse. --Tom Teasley

Bal-kan, as we are more aware than ever, is the Land of Honey and Blood; the routes of empires who have claimed and (still wish to claim) dominance in that region are perfectly reflected in Tom Teasley’s multi-cultural soundscape.

On a foundation built from the most ancient instruments of drums and flutes, Tom layers with an archaeologist's sympathies the tonal landscape that allows the word painting of a legendary tale to remind us, that even as the bards told stories in song and voiced the whims of the gods, in that very act of creation humankind gives voice not only to the creation of the gods themselves, but an even greater story: who we are, and why. --Robert Aubry Davis Davis, producer, critic, creator and host of Millennium of Music

Love of the Nightingale A Constellation of tunes

As Constellation Theatre prepares to close its critically lauded run of “The Love of the Nightingale” at Source theater, patrons who saw the show may be wondering, “Can I listen to those hauntingly beautiful tunes at home?”

Why, yes, you can, because multi-instrumental genius Tom Teasley recorded the soundtrack. CDs are available at the theater, through CD Baby, and may soon be downloadable on iTunes. Teasley, who calls himself a world percussionist but also plays plenty of flutes, pipes and mouth organs, has provided live music at several Constellation plays and the Folger Theatre’s production of “Conference of the Birds.”

In 2012, he released “All the World’s a Stage,” featuring highlights from “The Green Bird,” “Oresteia” and other Constellation shows, but this is his first complete soundtrack recording.--Rebecca Ritzel, The Washington Post