Welcome to my latest sonic exploration! Much of this music is inspired by my recent tour to South Korea for the U.S. Department of State.  In addition, this music will serve as the soundtrack for Constellation Theatre’s production, Journey to the West by Mary Zimmerman, based on the Chinese novel published in the 16th century during the Ming dynasty and attributed to Wu Cheng'en, one of the Four Great Classical Novels of Chinese literature. While this is not intended to be an authentic or scholarly representation of the depth of Asian music, it is meant to be my humble adaptation through my eyes, ears and imagination influenced by extensive collaborations with musicians throughout the world. I’m performing on more than twenty different instruments. The combination of ancient instruments including djembe, bongos, cymbals, gongs and all manor of percussion with several bamboo flutes are joined with modern electronic percussion, keyboards and melodicas to form the genre bending ancient/futuristic sonic pallet. I’m also adding some traditional Buddhist gongs and Chinese cymbals obtained in my recent travels. In addition, new instruments for this recording include the bawu featured in Journey to the West. Although shaped like a flute, it is actually a free reed instrument, with a single metal reed. The bawu is played in a transverse (horizontal) manner, has a pure clarinet-like timbre and its playing technique incorporates the use of much ornamentation, particularly bending tones. I’m also playing the kouxian in Zen Fever and The Mountain, which is a Chinese ancient jaw harp with pitched reeds allowing for a deep vibrato produced by flexing the cheeks. Even though I’m frequently using African and South American percussion instruments I’m playing with a variety of striking implements to take them out of their traditional environment and finding inspiration in Chinese opera percussion as well as Korean samulnori drumming.

Tapping into more of my jazz background, I’ve explored the use of drumset, jazz phrasing and concepts. Zen Fever is a humorous dialog with soft mallets on the drumset, bamboo flute, keyboards and kouxian inspired by the groove of rhythm and blues classic, Fever, made famous by Peggy Lee. Max in Beijing draws inspiration from one of my mentors, Max Roach, and is a virtual duet for drumset and temple blocks. Monkey Dance is inspired by the work of another jazz percussion legend, Jo Jones. The Gold Cicada features a 4/4 pulse with a quarter note triplet undercurrent phrased as a jazz waltz. Percussion jazz master, Elvin Jones, inspires this piece. The result is a poly-meter of 4/4 and 3/4 concurrently.

As always, my engineer, collaborator and friend Jim Robeson’s contributions are invaluable. I strongly feel that the result is as enjoyable a listen as it was to create.

I sincerely hope that this newest offering of my music can find a place in your ears, mind and heart.

“As a percussionist myself I greatly admire what a true percussion master can achieve. Tom Teasley proves himself just such a master on Eastern Journey (T2 Music, 2016). Inspired primarily by Korean and Chinese musical modalities as well as informed by his prowess as a jazz player, Teasley employs more than 20 instruments (percussion and non-percussion alike, and he plays ‘em all) to create pieces that are beautifully ornate, melodically appealing, rhythmically intricate and all combinations thereof…" Tom Orr – World Music Central

Believe it or not, the idea plays out well. He creates some wonderfully exotic moods with the flute wafting over caressed percussion on “Zen Fever” “The Mountain” and “The Heart is a Flower. ” None of the pieces are much over 5 minutes, so the themes and melodies don’t allow for self indulgence, as “The Djade Emperor” and “The Temple Garden” are wonderful joyrides, and “The Gold Cicada” is a walk through a reflective garden. You’re going to be surprised how much you like this one! -http://www.jazzweekly.com/2017/01/tom-teasley-eastern-journey/

Our favorite US Cultural Envoy & master percussionist continues his journey along the Silk Road, this time exploring the rhythms of the Far East. Inspired by such things as Korean samul nori drumming & Chinese opera, this is also Tom’s soundtrack for a play based on a 16th century (Ming Dynasty) Chinese novel. What a talent! George W. Harris 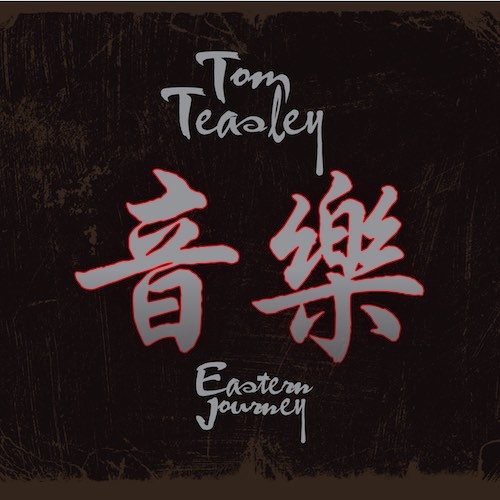 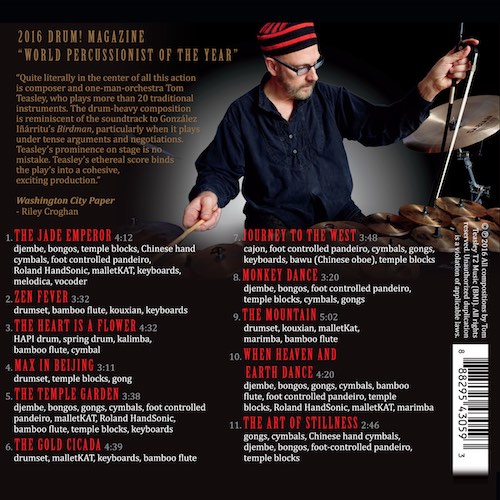